Email Revelations Mean ‘It Is Now Imperative’ That Fauci Testify 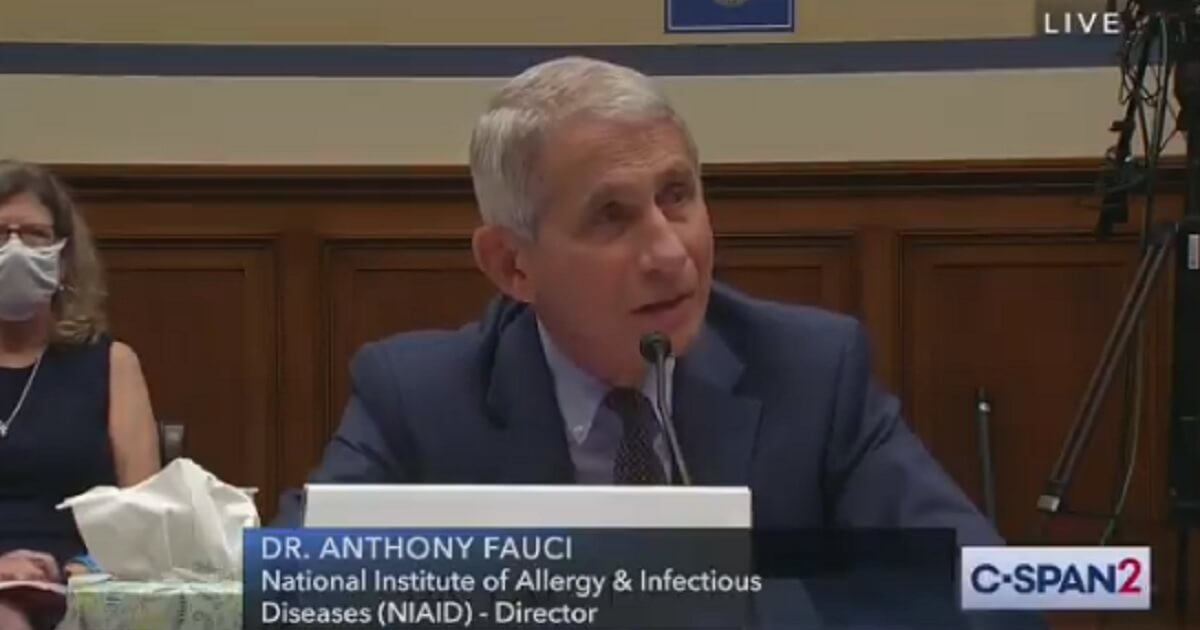 Two high-ranking GOP lawmakers on Thursday called on Dr. Anthony Fauci to testify before Congress regarding stunning revelations in emails he sent and received last year related to the coronavirus pandemic.

Those emails, obtained through Freedom of Information Act requests, appear to show, among other things, that Fauci and others might have had reason to believe the coronavirus originated in the partially U.S.-funded Wuhan Institute of Virology.

Republican Rep. Steve Scalise of Louisiana, the minority whip and a member of the select subcommittee on the coronavirus crisis, wrote a letter along with GOP Rep. James Comer of South Carolina, the House Oversight and Reform Committee ranking member, directed at the Democrats who head those two panels.

In the letter to Democratic Reps. James Clyburn of South Carolina — chairman of the coronavirus subcommittee — and Carolyn Maloney of New York — chairwoman of the Oversight Committee — the two Republicans said the need for Fauci to address the emails publicly is “imperative.”

🚨 BREAKING → Just sent a letter to Democrats demanding they call Fauci to testify before Congress.

We now know his emails contain evidence on COVID’s origins and the Wuhan lab.

Democrats are out of excuses to keep covering for Fauci and China. Americans deserve answers. NOW. pic.twitter.com/MqV3bNmkbm

Such testimony, Scalise and Comer said, might shed light on how government scientists handled the pandemic and debunk claims from Democrats, including that those scientists were “muzzled” by former President Donald Trump.

“More importantly, the emails contain new evidence regarding the origins of COVID-19, including the possibility it leaked from a U.S. taxpayer funded laboratory,” their letter said.

“The American people have a right to know what our government knew about the origins of the pandemic and when it was known.”

The congressmen said they wish to “convene hearings to examine the origins of COVID-19, the possibility that it leaked from a CCP-controlled laboratory, and any involvement of U.S. taxpayer funds.”

Scalise and Comer also requested full and unredacted versions of the emails that were released under the FOIA request.

“Your continued inaction while facing mounting evidence of the CCP’s malicious conduct is concerning,” the Republicans wrote to Clyburn and Maloney.

Scalise went after Fauci on Thursday afternoon in a tweet that called for a full investigation into the emails, which he said showed a “major cover-up” involving the director of the U.S. National Institute of Allergy and Infectious Diseases.

This is a major cover-up. We need a full Congressional investigation into the origins of COVID-19.

Dr. Fauci should immediately come before Congress and testify what he knew, when he knew it about COVID-19 origins and gain of function research in the Wuhan Lab pic.twitter.com/GNa0EvLYGU

Fauci’s emails continue to shock the world. They were released this week after being obtained by BuzzFeed News and The Washington Post.

Whaddaya know, Fauci agrees with me about the masks! pic.twitter.com/PcBsKS03IB

One email obtained in the FOIA request appears to show Fauci discussing with researcher Kristian G. Andersen the possibility that the coronavirus contained “unusual features” that “potentially” showed the virus strain might have been “engineered.”

Fauci was told in February of 2020 that the Wuhan Virus looked “engineered.” pic.twitter.com/3F8S0r21MW

National Review reported the National Institutes of Health gave $3.4 million to the Wuhan Institute of Virology from 2014 to 2019 through the nonprofit EcoHealth Alliance. Those funds were specifically for studying coronaviruses and bats.

The report said one email purported to show that EcoHealth Alliance head Peter Daszak privately thanked Fauci for helping to publicly shoot down connections between the pandemic and the institute in Wuhan.

“From my perspective, your comments are brave, and coming from your trusted voice, will help dispel the myths being spun around the virus’s origins,” Daszak said in an email to Fauci in April 2020 that was shared by BuzzFeed.

Fauci responded to Daszak, “Many thanks for your kind note.”