Gov. Abbott to Veto Funding for Legislature, Strip Lawmakers of Pay After Dems Walk Out on Voting Bill 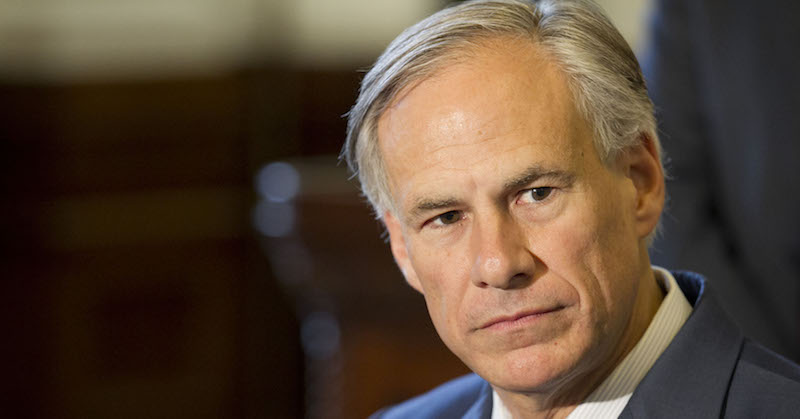 Texas Governor Greg Abbott vowed to cut funding for the legislative branch of the Texas government after Democrats refused to participate in voting on a bill to increase election security.

Texas Democrats stormed out of the House on Sunday in a last-ditch effort to block the passage of a voter security law, SB 7, effectively denying the Texas legislature the necessary quorum to hold a vote. Sunday was the last night of the legislative session.

In response to the tantrum, Abbott simply announced that he was going to strip the legislature of its pay.

“I will veto Article 10 of the budget passed by the legislature,” Abbott tweeted. “Article 10 funds the legislative branch. No pay for those who abandon their responsibilities.”

I will veto Article 10 of the budget passed by the legislature.

No pay for those who abandon their responsibilities.

According to the Austin-American Statesman, the governor of Texas has line-item veto over the state budget, a two-year spending plan that’s divided into 10 parts, or articles.

The section he’s threatening to veto contains $410.2 million for the legislative branch, including the $600 a month salary for lawmakers and salaries for support staff as well as funding for related agencies like the Legislative Budget Board, the State Auditor’s Office and the Legislative Reference Library, the newspaper reported.

Democrats tried to cast Abbott’s threat as an attack on the working people of the legislature.

“Punishing working class office staff, maintenance, and other support services because he didn’t get every single one of his demands is very on-brand for Texas Republicans,” state Rep. Gene Wu, a Democrat from Houston wrote in a Twitter post.

Maybe his party should have thought abo0ut that before short-circuiting the legislative process on Sunday night.

Democrats spent months characterizing SB 7 as “voter suppression,” according to Fox News, though no evidence has been given for the claim other than vague nods to the apparently permanently “marginalized.”

In truth, the bill that has Democrats alleging tyranny and suppression, SB 7, would in actuality impose fines on election officials who violated established procedures, require absentee voters to verify their identity with either their state ID number or Social Security number, limit the distribution of mail-in ballots, ban after hours voting and prohibit ballot drop-off boxes, as UPI reported.

Unfortunately for Americans everywhere, this is not the first time that Democrats have encouraged outright hysteria over common sense voter security bills, and it will likely not be the last.

As a workaround to the left’s childish antics, Abbott issued a statement announcing that a special legislative session would be held to consider the bill.

“I declared Election Integrity and Bail Reform to be must-pass emergency items for this legislative session,” Abbott said. “It is deeply disappointing and concerning for Texans that neither will reach my desk. Ensuring the integrity of our elections and reforming a broken bail system remain emergencies in Texas. They will be added to the special session agenda. Legislators will be expected to have worked out the details when they arrive at the Capitol for the special session.”

The announcement was welcomed by top GOP leaders in Texas, and it is hoped that the Lone Star State will be able to implement sound electoral security policies despite the Democratic rigmarole.

“The Texas legislature must have a special session to pass legislation to protect the integrity of our elections and ensure every Texan knows that their vote is secure,” said Texas Sen. Ted Cruz.

The Texas legislature must have a special session to pass legislation to protect the integrity of our elections and ensure every Texan knows that their vote is secure.

Indeed, the year has been one of landmark legislation in Texas, including a pioneering bill designed to defund cities that divest resources from police departments, and another that banned abortion after the fetal heartbeat can be detected.

With such notches on their belts, Texas Republicans just may get their state the voting laws it deserves.

But this fact brings up a rather strange point: That Democrats have chosen voter security as their Alamo, so to speak.

It seems incredibly odd that Democrats are currently championing such hatred for election integrity which, of all the hills to die on, is a pretty strange choice. Particularly so when one considers the years and dollars that the party of the left spent on delegitimizing the 2016 presidential election.

Perhaps, however, Democrats know that this is a battle they will lose, and rightfully so. Perhaps also, however, being seen to lose is the point.

Democrats in Texas abandoned their responsibilities, yes, and they should face the consequences of that. But Texas Republicans ought to be wary of giving the Democrats an Alamo moment, a moment of defeat so poignant that it has the effect of galvanizing the left’s base.

Democrats are not stonewalling common-sense voter security legislation for no reason. They still want to be seen as the resistance, despite their holding the reins of power in Washington. And they could believe that losing on this legislation is the path to that.

As such, while Abbott should continue to demonstrate his leadership by standing up for what is right, and never ceasing the defense of Texas’ right to secure elections, he ought also to consider the broader spectacle of the Democrats’ demise.

Defund the Democrats, yes. But demoralize them first.

US Embassies Fly LGBT Flag with Biden Admin's Blessing, Including at the Vatican