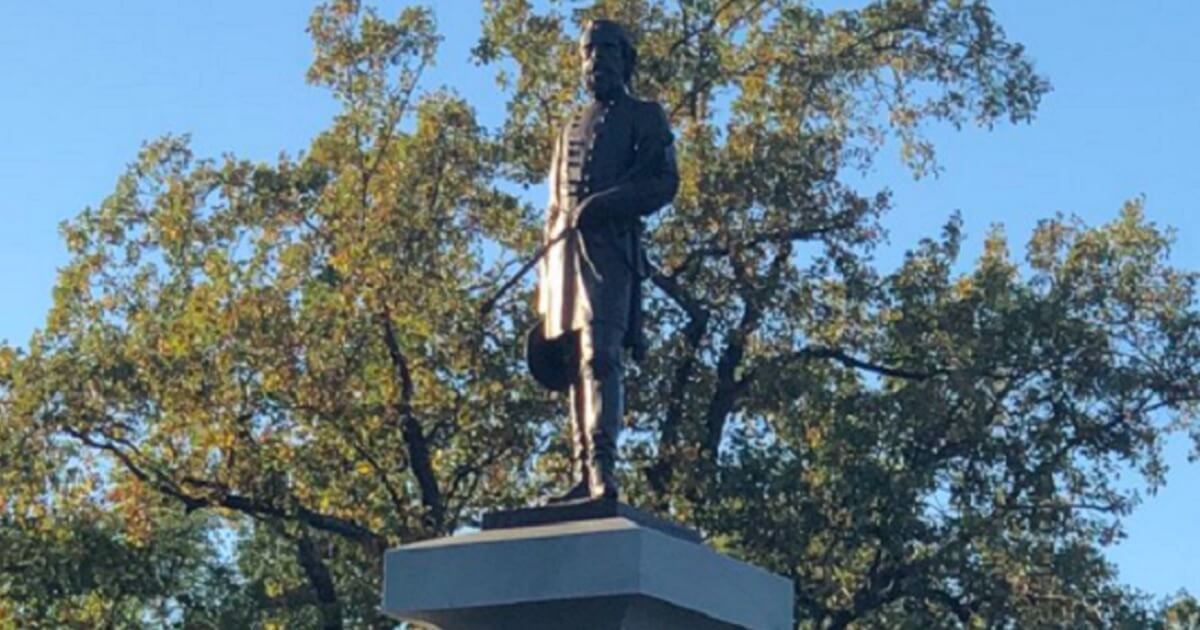 Democrats in Virginia are set to dig up the remains of a Confederate Civil War general and tear down a memorial as the American left continues its campaign to rewrite history.

The city of Richmond, Virginia, is currently finalizing plans to disinter the remains of Gen. Ambrose Powell “A.P.” Hill and to tear down the monument that honors his life. WRIC-TV reported that, under the orders from city officials, including millennial Democratic Mayor Levar Stoney, Hill will be dug up and erased from the city’s collective memory.

A committee right now is looking over the logistics of that, and is working with descendants of Hill regarding where to relocate his remains.

“We’re just really asking for permission at this point. Timelines and all those have not been decided but we know we still have to go through many, many more steps. This is the very first step in the process,” Chris Frelke, Director of Richmond’s Department of Parks, Recreation and Community Facilities, told WRIC.

Hill is being canceled 136 years after he was shot through the heart by a Union soldier on April 2, 1865 — just weeks before the end of the Civil War. By all accounts, Hill never owned any slaves and never supported slavery. He simply felt compelled to fight for Virginians during a time when many Americans were more concerned about their neighbors and their individual states than their loyalty to the nation as a whole.

When Virginia seceded from the Union, Hill chose to fight with his neighbors. Hill, a West Point graduate, was respected as a general, both by his own men and by opposing officers. Yet his remains will soon be dug up and relocated — now that his service to Virginia has been deemed to have been a slight to the modern enemies of American history.

Hill’s new enemies are a people who don’t understand nuance. These are people who apparently believe that the Civil War was a conflict in which only one of two binary choices could have made by men who took up arms. These people believe that men either fought for or against slavery — a mindset that oversimplifies the very complex conflict they want to prevent future generations from learning about.

In Hill’s case, amid a tumultuous and violent time where the political and social fabric of the country was ripped to shreds by people above his pay grade, he made the choice to resign from the U.S. Army and fight for the people of Virginia. There is arguably something honorable in Hill’s life and death that can never be accepted by modern critics with such a rudimentary understanding of a very complicated conflict.

In the years after Hill’s battlefield death, he was honored in Richmond, the former capital of the Confederate States of America, as the solider he was. Hill was not a race fanatic. The man, according to the accounts of some historians, was an abolitionist. He was also a pure battlefield tactician who served this country valiantly in the Mexican-American War.

When the fighting started in his home state, he stood with his neighbors, most of whom, like himself, didn’t own slaves.

He again fought valiantly, even if the banner his troops carried represented something now that we can can all agree was repugnant. But at this point in time, there is nothing to be gained from pitting Hill or others like him on either the right or wrong side of history. There is no errant history. There are simply events that occurred and led us to where we’re at now.

These are stories that belong to us all and should under no circumstances ever be forgotten.

Modern race fanatics are targeting Hill through a disgraceful act that former President Abraham Lincoln arguably would have opposed (“with malice toward none, with charity for all,” Lincoln said in his second inaugural address). President Ulysses Grant, who supported policies during Reconstruction aimed at unifying a scarred and divided country in the years following the Civil War, would likely also be appalled at seeing a man such as Hill targeted by a 21st century mob.

This Twitter post from 2019 is a good example of respecting history, while emphatically not endorsing the beliefs of those who helped make it:

Made my work partner tag along with me to see the A.P. Hill memorial while here. Only monument in Richmond with someone buried underneath it, and he was buried standing up. Viewed as a student of history and not an admirer of his cause. pic.twitter.com/P8ZKHtLHTj

Men who fought for the Confederacy were respected all over the north — and vice versa.

Few people are probably aware that just a few years after laying waste to Atlanta, Georgia, U.S. Army Gen. William Tecumseh Sherman was welcomed with open arms by Georgians, as the Atlanta Journal-Constitution noted in a 2016 article. After a waging a campaign of total war on the Peach State in 1864, Sherman was later popular with some Georgians who felt he simply did what was required of him.

Today’s belligerents aren’t capable of understanding the significance of such stories, or of comprehending the complexity of our rich and shared history.

Canceling Hill in Richmond in 2021 will further no cause, and right no wrong. It will momentarily appease a loud few who will only be placated until the next monument is targeted. The “woke” movement to rob the country of its rich history has proved it won’t stop at erasing Confederate generals.

These people proved that much last year when they wanted to cancel George Washington — a man who owned slaves — and Lincoln, the man who freed them.

We should as a country again embrace that context matters and history is not inconvenient. It’s simply an account of what happened. Monuments, even those that are now unpopular, are the physical representation of important stories. We should learn from our history. We should take in the stories of individuals from every corner of this country when we see monuments which honor those who came before us — even men like Hill.

What’s to stop those seeking to cancel history from some day coming after our World War II memorials and heroes? Will the great men who endured hell on earth to take Okinawa in 1945 be canceled because an estimated 100,000 civilians were killed in that bloody, almost three-month engagement, or because many of the American servicemen used ethnic slurs when referring to their Japanese enemies — enemies who at that time engaged in the systematic rape and torture of women and children, and who engaged in broader war crimes across Asia and throughout the Pacific?

While leftist take on Gen. Ambrose Powell Hill in Richmond, we should all ask why an American soldier is being targeted by a mob in Virginia while a statue honoring Russian dictator Vladimir Lenin, a brutal man with no ties to the American Pacific Northwest, right now stands undisturbed in Seattle.

Clarence Thomas HILARIOUSLY Cracks Jokes With TMZ Reporter, And The Video Will Make You Smile Ear To Ear