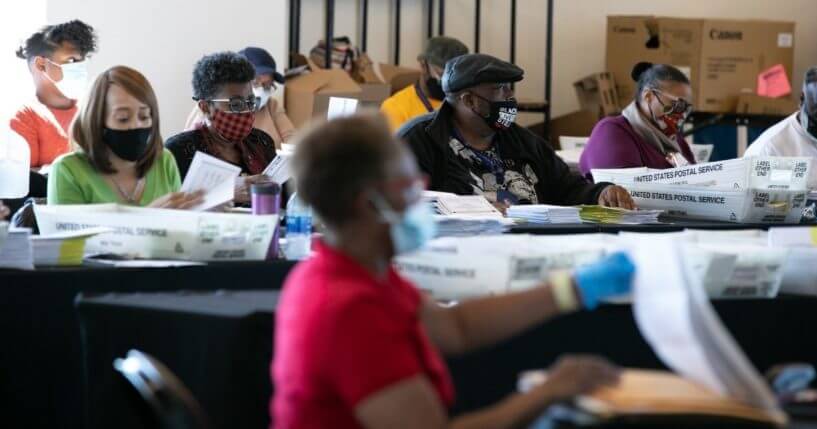 A Georgia judge cancelled a planned Friday meeting to discuss the protocols that would be followed to review 147,000 of Fulton County’s absentee ballots.

The move came after the county filed multiple motions to dismiss the case.

“Fulton County, the Fulton County Board of Registrations and Elections and the Fulton County Clerk of Superior and Magistrate Courts all filed motions to dismiss Wednesday night and Thursday morning arguing the plaintiffs failed to properly serve them notice of the suit,” Georgia Public Broadcasting reported.

“The filings also allege plaintiffs sued the wrong people, the defendants are protected under sovereign immunity and that plaintiffs failed to state a claim that entitles them to court action.”

Henry County Superior Court Judge Brian Amero, who is overseeing the case, scheduled a new hearing on these motions for June 21.

BREAKING: The Fulton County Board of Registration and Elections is attempting to STOP the inspection of ballots, approved last week.

There is absolutely no reason for this. Why are they fighting transparency? pic.twitter.com/Msnv5VOcr4

Last Friday, Amero ruled in favor of Georgia citizens who sued Fulton County to gain access to review absentee ballots over the objections of the state’s attorney general’s office.

Georgia Assistant Attorney General Charlene McGowan argued that there should not be an audit, but if there is one, it should be done by an independent group.

“The petitioners would be of the view that they are the ones to defend their own constitutional rights in this suit that they have filed,” Amero responded to that position.

The suit to gain access to the ballots was brought originally by Garland Favorito, a voting integrity advocate with VoterGA and resident of Fulton County.

Others have joined in, including the Tea Party Patriots Foundation, which filed an amicus brief in the case.

Favorito “says county workers likely fabricated ballots and counted some ballots multiple times on election night,” and the lawsuit cited a video of the counting and sworn statements from observers, according to The Atlanta Journal-Constitution.

State Farm Arena in Fulton County is the location where poll watchers were told by election officials that counting had stopped for the night, only for surveillance video to reveal it resumed later in the night.

Dr. Lisa Detter-Hoskin — a senior research scientist with the Georgia Institute of Technology, who testified for the plaintiffs last Friday — said that in order to properly review the ballots, a minimum resolution of 600 DPI (dots per inch) scan would be needed.

This resolution would allow the audit team to check for abnormalities such as candidate selection ovals being filled in by machines, rather than by hand or mail-in absentee ballots having no folds, as some Fulton County election observers previously claimed in sworn affidavits.

At the conclusion of last Friday’s hearing, Amero ruled that the plaintiff’s team would be able to both “inspect and scan absentee ballots.”

“It is outrageous that Fulton County continues to be a target of those who cannot accept the results from last year’s election,” he said.

“The votes have been counted multiple times, including a hand recount, and no evidence of fraud has been found.”

Favorito believes if there was no fraud, the audit will assuage people’s concerns that there was.

“If all these votes are correct and there are no counterfeit ballots, then we can go home and rest assured that the election was conducted correctly,” he said, according to The Associated Press.

“If there are a lot of counterfeit ballots, then we need to figure out how to prevent that in the future.”

They're Not Going to Produce a Report That's Valid