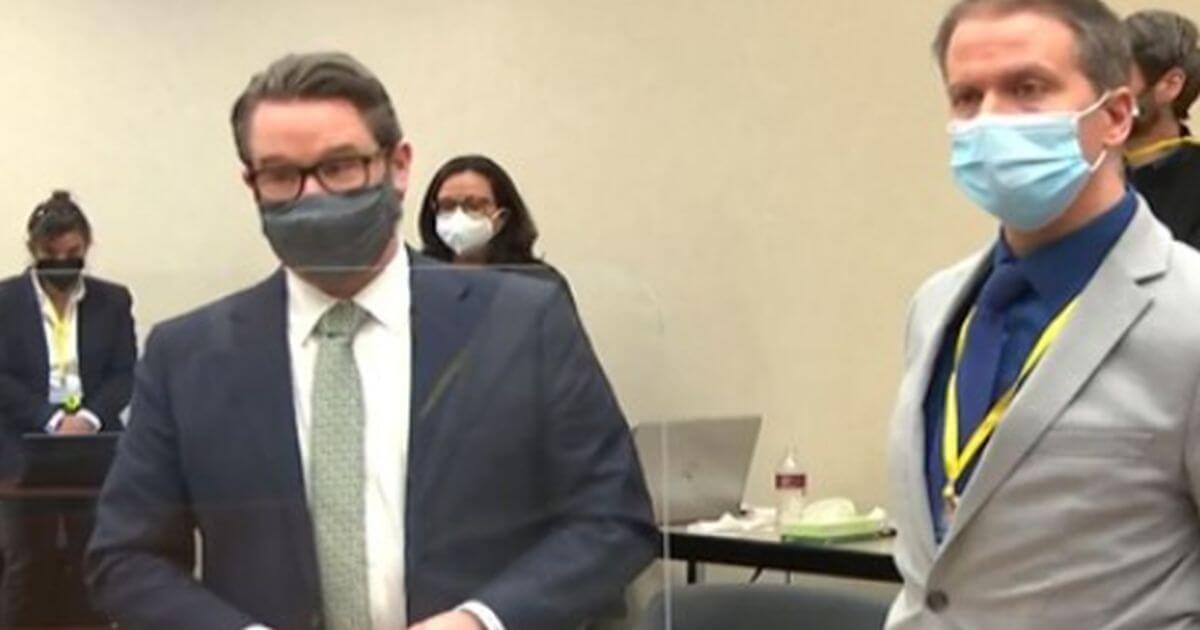 On Thursday, the closing arguments were presented in the high-profile trial of former police officer Derek Chauvin, who is accused of killing George Floyd in 2020.

While Chauvin was convicted long ago in the fiery mob-justice court of public opinion as irrefutably guilty of perpetuating systemic racism, he is still subject to the protections of the Constitution and is being tried in a court of law, meaning he is presumed innocent as the prosecution attempts to prove his guilt.

His attorney Eric Nelson was thus tasked as every defense attorney is with rebutting the accusations put forward by the prosecution.

During his closing arguments on Thursday, Nelson summarized his case that there was simply no evidence his client had “intentionally, purposefully applied an unlawful force” to George Floyd, who died after Chauvin knelt on him for nearly ten minutes in a chilling incident that went viral, sparking nationwide protests and riots and a revival of the Black Lives Matter movement.

Nelson emphasized to the jury their simple task of determining whether the state adequately demonstrated his client’s role in Floyd’s death constituted the charges of second-degree murder, third-degree murder and manslaughter.

“The state has failed to prove its case beyond a reasonable doubt, and therefore Mr. Chauvin should be found not guilty of all counts,” he said during his closing arguments, according to The New York Times.

One hopes that any defense attorney worth their salt would make the case that the prosecution failed to prove their client’s guilt.

CNN senior legal analyst Laura Coates, however, seems to believe Nelson’s job was not to defend his client’s presumed innocence, but to prove his client’s innocence, troublingly.

“Defense begins the closing by defining reasonable doubt, not with why #DerekChauvin is innocent,” she wrote on Twitter on Thursday morning. “Think about that.”

Defense begins the closing by defining reasonable doubt, not with why #DerekChauvin is innocent. Think about that. #DerekChauvinTrial#GeorgeFloyd

Now, Coates is a legal analyst, something I most certainly am not.

But I am an American and understand how little authority being paid by CNN to say things gives one’s credibility, so I think it’s safe to critique what she’s saying in the sharpest of terms as an American citizen.

You don’t need a law degree to know that every citizen of this great nation is guaranteed the presumption of innocence, and for a legal commentator to imply Chauvin was exempt from these protections speaks volumes about our current socio-political climate.

It’s chilling that this is the first place her mind went, as though it was somehow indicative of systemic white supremacy that an accused man’s legal defense established reasonable doubt.

The activists understandably outraged by Floyd’s death clamor and cry for “justice,” yet they misleadingly undermine the very tenets of our justice system that are meant to protect both the Floyds and the Chauvins of the world from the injustice of being denied due process.

The mob presumed Chauvin was guilty last summer, and the best attorney in the world would never have managed to prove his innocence in their mind.

But that’s precisely why the mob simply cannot try criminal cases — and why people like Coates probably shouldn’t be providing legal commentary if she so sorely misunderstands the basic principles of our justice system.

Do You Really Want to Stop Gun Violence? Then The Solution is to Absolutely Hire More Police Officers