Biden Talked Tough on China 3 Weeks Ago, But He Just Inked a Major Climate Deal with Our Biggest Adversary 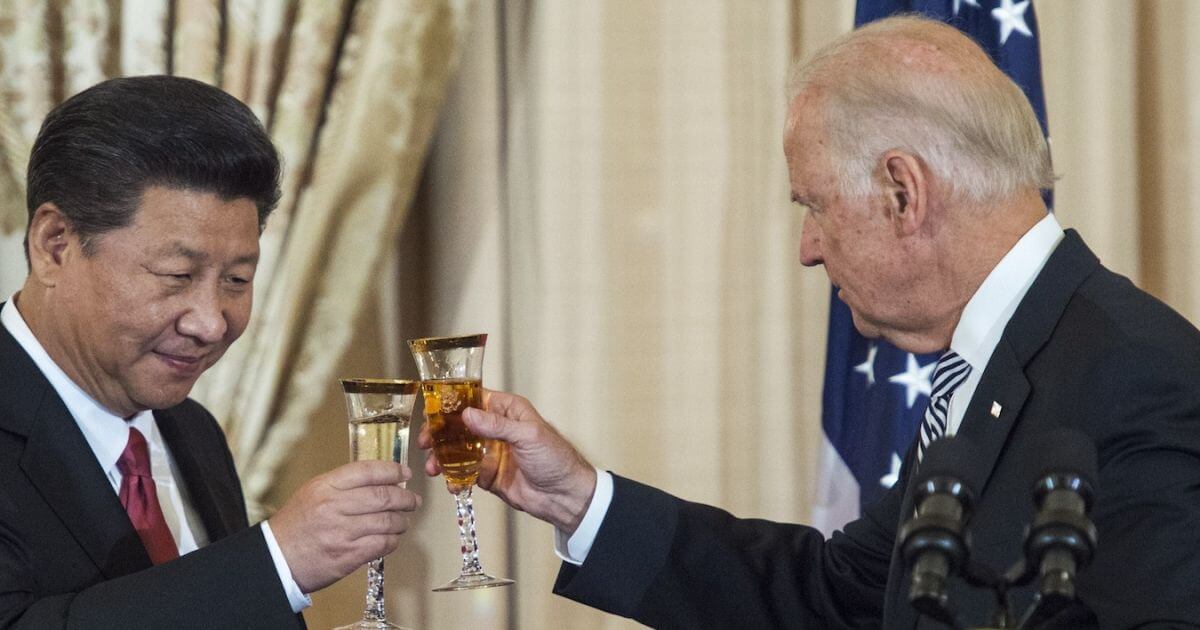 During his first news conference in the White House, held three weeks ago at the end of March, President Joe Biden assured America he was going to get tough on China.

While he said that Chinese leader Xi Jinping was a “smart, smart guy,” Biden said “he doesn’t have a democratic with a small D bone in his body,” according to a transcript of the March 25 event. And Uncle Joe said when the two of them talked after the election, he read that lying, dog-faced pony soldier the riot act.

“I made it clear to him again what I’ve told them in person on several occasions, that we’re not looking for confrontation, although we know there will be steep, steep competition,” Biden said.

“Two, that we’ll have strong competition, but we’ll insist the China play by the international rules, fair competition, fair practices, fair trade. Thirdly, in order to compete effectively, I indicated that we’re going to deal with China effectively” through, among other things working with our allies “to hold China accountable in the region.”

And, in his first major action to hold China accountable on a matter that can be tied to trade, the Biden administration went and reaffirmed the most one-sided agreement both the United States and China are a part of.

In a joint statement produced after a meeting between U.S. climate envoy John Kerry and his Chinese counterpart in Shanghai, the key takeaway seemed a commitment that said “the United States and China are firmly committed to working together and with other Parties to strengthen implementation of the Paris Agreement.”

In fact, the only real win the United States got was that China said “they are committed to pursuing such efforts, including by taking enhanced climate actions that raise ambition in the 2020s in the context of the Paris Agreement with the aim of keeping the above temperature limit within reach and cooperating to identify and address related challenges and opportunities.”

“This is the first time China has joined in saying it’s a crisis,” Kerry told reporters in Seoul, according to The Wall Street Journal.

He added the Chinese side said the “crisis” must “be addressed with urgency. And they talked about ‘enhancing.’ So the language is strong.”

However, the only actual numbers either side would commit to were the ones in the Paris agreement — and there’s a reason that’s problematic.

Earlier this year, in the immediate aftermath of Biden being sworn in as president, Poynter Institute-affiliated “fact-checking” hot mess PolitiFact looked at the allegation by GOP Florida Sen. Rick Scott that the Paris agreement “does nothing to hold real polluters, like Communist China and India, accountable.”

They said this was “Mostly False.”

PolitiFact agreed that under the Paris climate accord, which the Biden administration rejoined after former President Donald Trump pulled out, that every “nation decides for itself what its [carbon reduction] goal will be.”

They also noted there wasn’t any real enforcement mechanism aside from “naming and shaming.”

However, it was “Mostly False” for this reason: “The agreement’s compliance rules might be weak, but they apply equally to all participating countries. The Biden administration will determine how ambitious the U.S. goals will be when it rejoins the agreement. At this point, we don’t know what those will be,” PolitiFact stated.

PolitiFact is more interested in per capita carbon emissions or carbon emissions as a function of GDP — both of which are wonderful statistics but have zero to do with how much carbon a country emits. And, perhaps most tellingly, they soft-pedal the fact China seeks only to maintain growth over the short term.

“So, while its emissions would rise as its economy grew, they wouldn’t rise as much as they would have if everything worked the way it did in 2005. China said it would aim for carbon dioxide emissions to peak in about 2030.”

See? Voila! It holds them accountable!

I often wonder whether Snopes is a false-flag website set up by PolitiFact to make them look sane.

Anyhow, the point is that China just reaffirmed its commitment to an agreement under which it’s not expected to make serious cuts to its emissions because it’s growing economically.

Even if China is a poorer country, I was unaware of the fact that the environment responds differently to the carbon your country emits if it’s poorer and growing economically. A magical thing, Mother Earth.

But wait: Kerry got them to say it was a “crisis” and “they talked about ‘enhancing.’” It’s in the joint statement; they agreed to it. They didn’t agree to any numbers or even a ballpark figure, but don’t worry — they vouchsafed to us they would be “enhancing” their commitments to hit peak carbon dioxide emissions in 2030 and then some. It’ll happen, guys, for real.

I understand this might have been the best Kerry could have gotten out of the Chinese, which should tell us a great deal. However, the fact the Biden administration sent someone who was either so desperate or gullible as to tout this as a victory should tell us even more.

When the Biden administration releases its targets under the Paris agreement after rejoining, they’ll likely feature a more substantial cut in our emissions, one which will put American jobs in the coal and fossil fuel industries at risk.

It’ll make our cost of living significantly more expensive and you can count on the president to do everything in his power to meet those goals, no matter how destructive they will be.

If China’s “enhancing” of its Paris agreement targets aren’t similarly drastic, then no, the Biden administration isn’t getting tough on China.

He’s not holding them accountable, he’s not ensuring “fair competition, fair practices, fair trade” with Beijing. The talk is willing, but the action is weak.

Just Months After Biden Was Sworn In, Russia Has Massed More than 150,000 Troops on Ukraine's Border