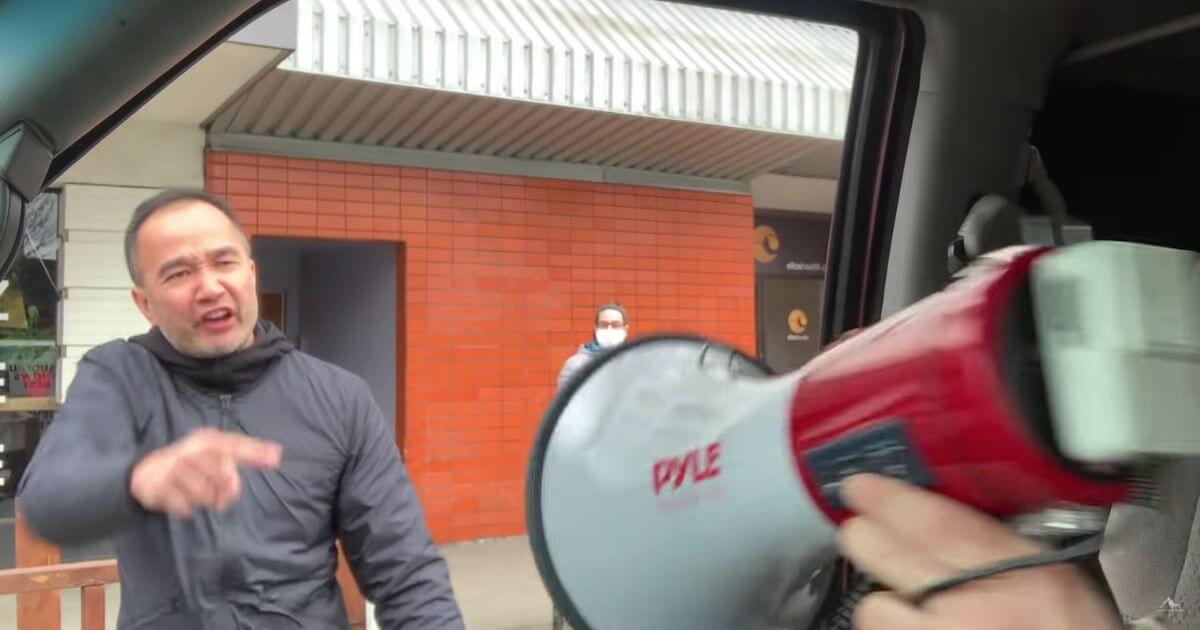 A Canadian man who was poking fun at people in Vancouver for wearing masks outdoors was attacked with a bicycle, and the entire ordeal was caught on camera.

Last week, a man named Alexander Lasarev posted a video of himself haranguing random people on the sidewalk as he rode down the street with a megaphone. The man describes himself on YouTube as a comedian. On March 27, he was an assault victim — but luckily he didn’t appear to be harmed.

“Isolate yourselves,” the man said to people through his megaphone. “Wear your masks, social distance. Just trust the narrative.”

“You’ve never been lied to about anything — the government loves you,” he mocked, thanking nameless people for masking up.

WARNING: The following video contains graphic language which some viewers will find offensive.

“Congratulations for following the narrative, and trusting the news, and not questioning anything,” he said. “You’re all doing a great job complying with the narrative.”

“There’s definitely not a psychological operation happening when you’re convinced of a reality that’s based on fear that has nothing to do with what’s actually happening.”

That’s when Lasarev was accosted by an angry man whose mask had slipped off — both literally and figuratively. Those stereotypes about Canadian culture and friendliness gone too far are apparently not true, after all.

The man Lasarev filmed had apparently became angered after his worldview was challenged by a sarcastic man not wearing a mask, so he used his own bicycle as a blunt force weapon.

The Victoria News confirmed the incident occurred on March 27 after speaking to police in Vancouver, and an officer said the apparently pro-mask attacker was taken into custody.

“Around 3:30 p.m. on March 27 a convoy of vehicles was taking part in an anti-mask rally on Main Street. A passenger in one of the vehicles was talking into a bullhorn and pointing it out the window,” police said. “Witnesses to the incident detained the cyclist until Vancouver police arrived and took custody of him.”

The unhinged attacker was not named.

Lasarev’s megaphone antics could be described as immature, but it’s difficult to argue that his point wasn’t proven halfway through the video. He certainly didn’t appear to be aggressive. In the span of a year, the Western world went from living normally to being not so politely encouraged to wear up to two masks or be treated like lepers.

Some people don’t like when others point out that the body was designed to fight infections. Some people really don’t like being reminded of the holes in the theory that mask-wearing has actually done anything at all throughout this nightmare. They definitely don’t like to be reminded that they have the freedom to not cover up their face — or that they can ignore those who are loudly opposed to the practice.

This is the culture that corrupt leaders, the establishment media and a hysterical public which usually resorts to arguing on social media has created. Agree or disagree with Lasarev’s antics, he isn’t wrong.

Something hasn’t smelled right for a year with the way we’ve collectively handled the coronavirus pandemic. Now, there isn’t even a psychological reward for those getting vaccinated. People are told what they were told before the shots: Wear your mask or masks.

Mask up! Stay home, you could save a life! We’re in this together — just apart.

People actually live by those absurd mantras, even as public health goalposts constantly move around in front of them.

As this video reminds us, government officials don’t need to crack down on people who don’t hook, line and sinker buy the mask bit.

The culture has created an army of insane drones that will judge you with their eyes, film you inside grocery stores if you dare to show your face and, apparently in Vancouver, attack you with a bicycle if you point out that an issue such as mask-wearing is one that must remain hotly debated.