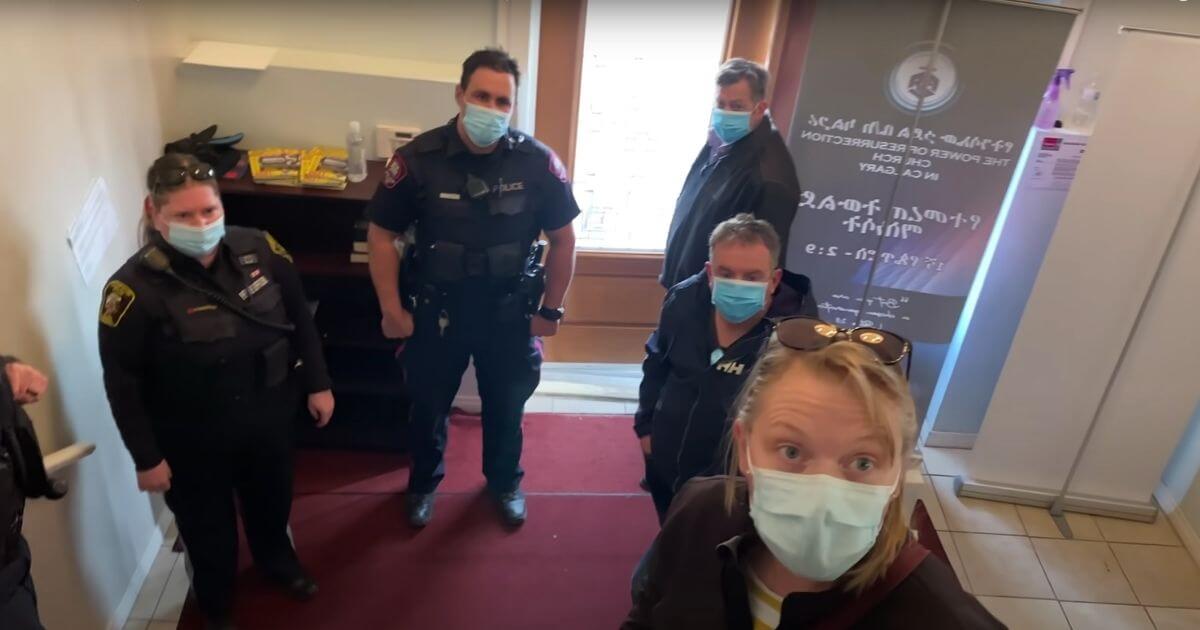 An outrageous incident in which police barged in and interrupted a Good Friday service in a church because of COVID rules happened in the U.K., so it could be taken as yet another lesson on why it’s so important to protect our First Amendment (also why it was a great thing that our Founders fought a revolution to separate from Britain, which also gives us the blessed freedom not to have to listen to anything the royal family members say, hint hint.)

Canada has also given us some even closer examples of government tyranny over religious rights, such as jailing a pastor for refusing to restrict his church’s capacity to a ridiculous 15 percent, even though they were taking every possible safety precaution.

That pastor said there’s empirical evidence that the lockdowns were causing more harm than good, and explained, “I’m doing what I’m doing in obedience to Christ. I am quite content to let the Lord Jesus Christ himself decide whether or not this is persecution.

“He promises that those who are persecuted for his namesake will be blessed. He’s the one that blesses, and I’m content to leave that in His court.”

But he was downright meek compared to the pastor in this must-see video that went viral, racking up millions of views in just 48 hours.

When some cops enforcing strict COVID laws tried to interrupt the Passover service at Calgary’s Street Church in Alberta, Polish pastor Artur Pawłowski dealt with them much like the way Jesus dealt with the moneychangers.

He repeatedly called them Nazis and Gestapo and ordered them out until they actually backed down and left.

He shouted after them, “Nazis are not welcome here, out! And don’t come back without a warrant … Do not come back, you Nazi psychopaths! … Unbelievable, sick, evil people intimidating people in a church during the Passover, you Gestapo, Nazi, Communist fascists.”

He then told his congregation, “Can you imagine those psychopaths, Passover, the holiest Christian festival in the year, and they’re coming to intimidate Christians during the holiest festival? Unbelievable! What is wrong with those sick psychopaths?”

Incidentally, he’s not afraid of being arrested, because he not only has Jesus on his side, he has the law. In Canada, it’s a criminal offense to interrupt a church service.

Granted, his rhetoric might have been a bit overheated, but it shows that many Christians are fed up with discriminatory state encroachments on religious freedom under the guise of public safety.

Unfortunately, even here in America over the past year, we’ve been remiss in not protecting our First Amendment freedoms as strongly as we should.

While it was prudent to observe strict COVID safety rules, particularly during the early days of the pandemic and before there were multiple vaccines, there’s no question that many state and local governments wildly overstepped their powers in blatantly discriminatory ways.

The Supreme Court had to slap them down for declaring liquor stores to be “essential businesses” while ordering churches closed, and imposing limits on churches that were never required of Walmart and other stores, and even on church services held outdoors.

There is a middle ground between observing reasonable safety measures and allowing the state to crush our right to worship, even on the holiest of days like Good Friday or Easter.

If church congregations are observing public safety precautions no stricter than those imposed on other gathering places, then they are perfectly justified in standing up for their constitutional rights to assemble and to worship.

And if the police want to come to a service, then they’re more than welcome. Just show up on time and sit quietly until it’s over.

Democrats Must Be Held Accountable For Crimes Against Children…Incredible Video Shows Young Immigrant Boy Alone, Sobbing By Side Of Road After He Was Deserted By Group Of Invaders